Fashion Tips
Warning: Use of undefined constant php - assumed 'php' (this will throw an Error in a future version of PHP) in /home/customer/www/leatherexotica.com/public_html/wp-content/themes/storefront/inc/structure/post.php on line 85

In the 1980’s designers created luxury clothing in leather and suede that consumed vast amounts ok skin, using it as if it were fabric. Skin size was no longer a limitation-larger pig and cow skins became increasingly popular as tanneries around the world began to copy the rich, luxuries hand of the finest European tanned lamb leathers and suedes.

French, English and Italian designers led the way, designing and inventing some of the most creative and saleable leather clothing. Giorgio Armani, Claude Montana, Azzedine Alaia, Emanuel Ungaro, Valentino, Anne Marie Beretta and Vivenne Westwood were at the vanguard. There seemed to be no limitations. Anything that could be done in cloth could be done in leather. The various weights and choices, treatments, embossing and prints, made it a designer’s dream. Leather became a design material that signified wealth and taste, thereby entrenching its position in the designer market. 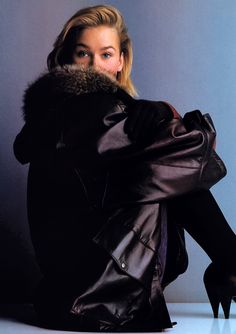 Those designers who used smaller lamb and goat suede skins became more adept at engineering cut lines in creative ways, as demonstrated here in Anee Marie Beretta’s voluminous coat in 1984. Beretta turned the necessity of creating the garment from small pieces of skin into a design feature, by embellishing each of the seams in red.

Valentino used shearling, dyes yellow, to create a striking flared topper in 1989. The pieceing together of the lambskin can be seen clearly on the sleeves.

The striped leather top from Georgio Armani’s 1980 collection also makes a virtue of the necessity to cut from small pieces of skin.

Azzedine Alaia’s suit from 1984 demonstates how the trademark wide shoulders of the decade were successfully translated into leather, while the use of decorative stitching on the seams again highlight the construction of the skirt, with its fishtail godet hem, and jacket from small pieces of leather.

The fine leather used to make Emanuel Ungaro’s above the knee, double-breasted coats from 1985 show how leather can be eased gebtly to create fullness at the armhole line. 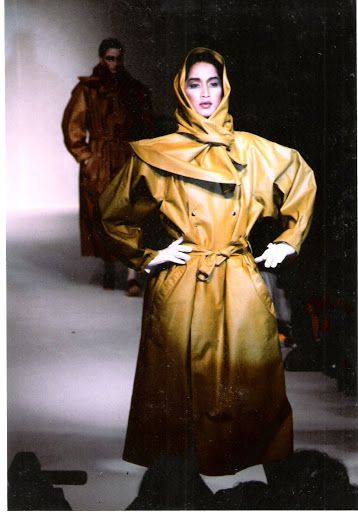 Vivienne Westwood explored the sculptural qualities of leather in this bodice and skirt from 1988. Using a number of sources of inspiration, Westwood took a corset and added elbow crash-pads, combining these with a gathered skirt and upper sleeves from the Victorian era in an eclectic mix that is her trademark style.

While big-name American designers such as Calvin Klein and Oscar de la Renta began dabbling in leather, it was the hip-hop movement of the late 1980s and early 1990s especially the ‘8-ball’ jacket, that caused the biggest stir. This multi-colored leather jacket by Michael Hoban, manufactured by North Beach Leather in autumn 1989, with the “8-ball” motif associated with drug slang for the crack heroine, was so popular that young people were being shot for their jackets.